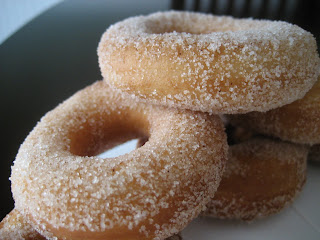 Doughnuts. They could possibly be one of the best foods ever invented. I mean, who doesn't love fried dough covered in sugary glaze, chocolate, powdered sugar or filled with cream or berry filling? Now I will go ahead and say that these doughnuts are not as good as Dunkin Donuts or Krispy Kreme, but for a quick doughnut recipe they were pretty darn good! I had seen this recipe a while back on Everyday Italian and have been waiting on an excuse to make them. I had intended to make them and submit them as an entry for a doughnut blogging event that was hosted recently, but sadly I have been so busy and have barely had time to cook. But I decided to make them as a special treat this weekend while my sister was visiting. We both agreed the cinnamon sugar doughnuts were our favorite followed by the powdered sugar and then the doughnut holes. The glazed ones didn't turn out so great. They were a bit soggy. I had planned on doing chocolate ones as well, but we had a sudden power outage just as I finished frying up the doughnuts so I couldn't melt my chocolate. I think the chocolate would have been great, too. If you're looking for a quick sweet treat, give these a shot. But be warned, you'll probably eat them all just like we did.

Whisk the sugar and cinnamon in a medium bowl to blend. Set the cinnamon-sugar aside.

When the oil is hot, working in batches, fry the doughnuts until they puff but are still pale, about 45 seconds per side. Using a slotted spoon, transfer the doughnuts to paper towels to drain. Cool slightly. While the doughnuts are still warm, add to the bowl with cinnamon-sugar and generously coat each 2 times with the cinnamon-sugar. Serve warm.

Other variations I made... 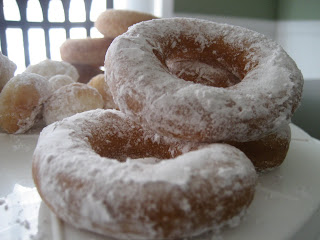 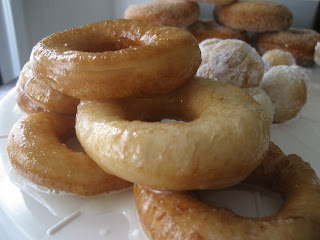 Glazed Doughnuts-I used a simple glaze of milk and powdered sugar for these. 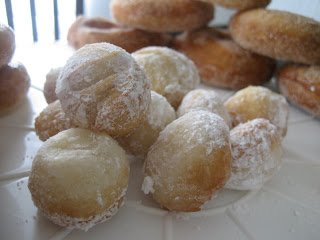 Doughnut holes-Couldn't waste any of that dough!
Posted by Renea at 8:42 PM

Goodness Girl, you outdid yourself. Great, now I want a doughnut. : )

wow, talk about some doughnuts!! sorry you missed the event, but i think you more than made up for it in the amount and variety of doughnuts you made! they look great! :)

My mouth is watering!

I would love to see you on there to chat about food and cooking you can talk about anything you like and start your very own topics. :-)
or see my main food recipe website Jeenas food recipe site

Hope to see you soon

All your donuts look great!

you make my day :)
http://kayteskitchen.blogspot.com/2008/03/my-first-award.html

Thanks for making my day! Check out: http://tinyurl.com/2bvkh6

mmm I can't think of anything wrong with some good ol' fried dough! And, I've tagged you for a meme :)
http://carascravings.blogspot.com/2008/03/crossing-some-things-off-list.html